As we get closer to the presidential election my various politician induced paranoias bubble up to the surface and make me think about survival guns.  Now, I do not think that the end of the world is coming just, but anything that gives me an excuse to get another gun is fine with me.

All jokes aside, I am in the process of building myself a long barrel Glock chambered for the 10mm round.  I am building it with a 6″ barrel and slide from Lone Wolf and with a red dot mount from the good folks at sight-mount.com.  Here is an image from Sight-Mount, but my gun will look a bit different since it is a lot longer:

10mm is a pretty potent round and a 6″ barrel gives it a notable energy and speed improvement over shorter barrels.  10mm is a new caliber for me, so I figured I should research its ballistics a bit more.  As a part of that researched I stumbled onto the fact that some of the peppier 10mm ammo achieves really impressive speeds from longer barrels.

I had looked at getting a pistol caliber carbine in the past, but at the time I mostly looked at 9mm and 45ACP versions and they do not offer enough of an advantage in energy for me to mess with,  They are definitely easier to shoot accurately and they do go faster, but it always seemed like higher pressure rounds make more sense in a carbine like that.  I had considered getting a 357Mag levergun, but since Remington bought and ruined Marlin, that became an iffy proposition.

I had looked into 357 Sig carbines, but the only viable offering I saw was getting a Mechtechsys conversion for my Glock frame, which is an interesting solution, but it is not as compact as I want.  Also, since I live in California, I would have to mutilate mag release on a perfectly good Glock to make it legal (look up “bullet button” if California gun law perversions are new to you).

I let it go at that, but now I stumbled onto a company called TNW Firearms.  They make a switch barrel pistol caliber carbine called Aircraft Survival Rifle (ASR) that can be configured for both 357Sig and 10mm (and other calibers). 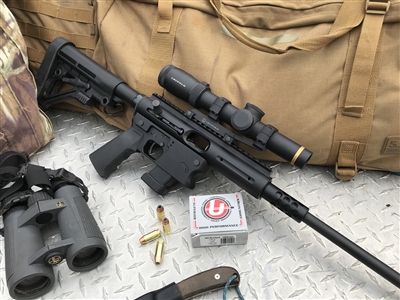 On top of that, they chrono’ed the velocity of some of the peppier ammo from Underwood and Buffalo Bore among others out of their 16″ barrels.

If these numbers are true, this is exactly what I was looking for: 357 Sig carbine, 10mm carbine.  I did a little more digging and I am pretty impressed with what I see.  The basic weapon design is clever and a few minutes of web surfing yielded a number of positive reviews.  The trigger is reputed to be decent as well.  After some consideration, I think I will get a 10mm version of the carbine and test it thoroughly.

Now, considering what my interests are, I started giving some thought to the best sighting system for such a carbine.  It comes from the factory with some sort of an inexpensive 4x scope.  If it is the design I am thinking of, I fully intend to chuck it into the trash bin as soon as it gets here (well, I suppose I’ll look at it briefly to be certain).

Since this is ostensibly a survival tool, I would like to set it up with a dual sighting system: that gives me both unity magnification and some sort of a 2x to 4x magnification for a bit more precision.

That means either a low range variable, or a combination of simple iron sights with a compact fixed power scope or  red dot with a magnifier (or a red dot and  magnified scope in QD mounts pre-sighted in).

Once I get my hands on the carbine, I will do some experimentation and see what works best.  The trick is to keep the whole sighting arrangement sufficiently compact and light weight to make sure it does not upset the balance of the carbine.  Also, since the rail is fairly short, I need to give some thought to what kind of iron sight arrangement will work best.  Most AR sights are designed with a longer sight radius in mind, so I do not know how well they will work on the ASR.  Most red dot sights with magnifiers are probably too heavy, which raises another concern.  It is the same concern for most quality low range variable scopes.

Anyhow, this will be an interesting challenge.