This scope test popped up somewhat organically: I saw the new Terra scopes at SHOT and made a mental note that it would be interesting to test one against the Conquest 3-9×40 that it is effectively replacing.  However, it did not quite fit into my test schedule and I am pretty busy to start with, so I filed it away as something that I would do if I had spare time.  Spare time is not something I have a lot of, so this was not going to happen any time soon.  Naturally, as I soon as I file something away as “not likely”, I get asked if I am interested in doing that exact thing.  Someone on the Opticstalk forum was curious what I thought about the new Terra enough to send me his brand new scope.  Someone else volunteered to send me his Conquest and the test was on.  As it were, I also decided to look at a couple of Nikon scopes, so I procured two: a 2.5-10×42 Monarch and a 2.5-10×40 Prostaff 5.  The Monarch retails for right around $400, so I figured I should test it right next to the Terra and the old Conquest.

Before I go into the results of my tests, I would like to point out that this is all based on a sample of one and that I sincerely hope that the one Terra I looked at is an unusually bad sample.

I did most of my tests in reasonably decent lighting.  I looked at the scopes in low light as well and the results were more of the same, so I did not dwell on replicating a great variety of challenging lighting conditions.  The differences between the scopes I looked at were significant enough where there was no need to look for particularly subtle effects.  There is nothing subtle about what I saw or about the conclusion that came out of the tests.

Here is the spec table, that includes the three scopes I tested (bold) along with two more that compete for the same basic customer.  The Meopta MeoPro is a bit more money and the Nikon Prostaff 5 is a bit less.  The 3-9×40 Conquest used to retail for  $400 (equipped with the Z-plex reticle) when it was available and was widely considered to be one of the best hunting scopes for the money.  I compared the Conquest to the MeoPro a while back (and I have seen a fair number of samples of these), so I have a pretty good idea of how these two stack-up (here is the original article).

The Terra had a Z-plex reticle which seems a bit on the thick side for a simple plex reticle and it worked well in low light.

The Conquest had a #4 reticle, which is notably thicker than the Z-plex and even better in low light.

The Monarch has Nikon’s BDC reticle which I am not a huge fan of.  Having played with it some, I think it has potential, but that is a story for another day.

If all we did was look at the specs, the Terra would look pretty good: it is comparatively compact and light, has reasonably decent eye relief and wide field of view (FOV).  It is supposed to be manufactured in Japan, but I have no insight on where the components come from.

The Conquest was assembled in the US with the lens provided by a Czech OEM and the mechanics supposedly coming from Germany.

The Monarch is made in the Phillipines.

In the grand scheme of things, I do not care much where a scope was built, as long it was built well.

From left to right: Terra, Conquest and Monarch 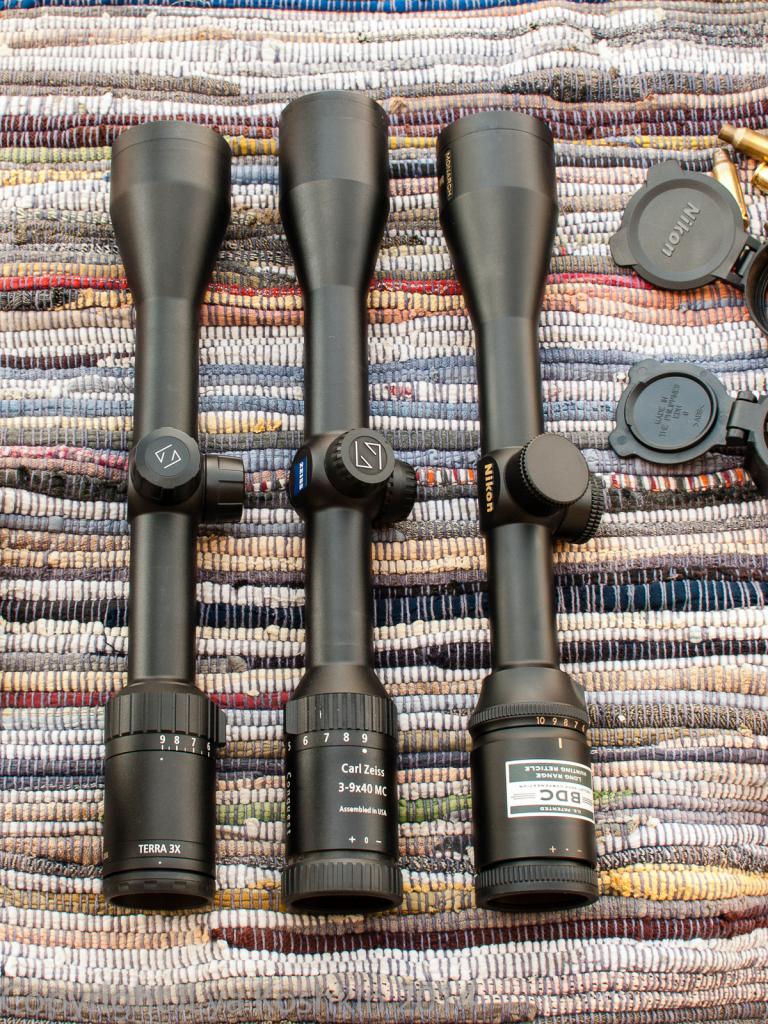 I tested the scopes on my AR-15 chambered for 6.5Grendel.  It is a soft shooting rifle, so I really was not trying to work these scopes out from a durability standpoint and, this time around, there were no unintended shock tests: I did not drop anything while testing.

I have been looking at tactical scopes almost exclusively lately, so I found myself woefully unprepared for testing scopes with 1” tubes.  Still, after some digging I found a couple of sets of 1” rings that have reasonably repeatable return to zero: Warne QD and Millett Grabber.  I used them with an old IOR riser I have had for a number of years to get the optical axis to a proper height. 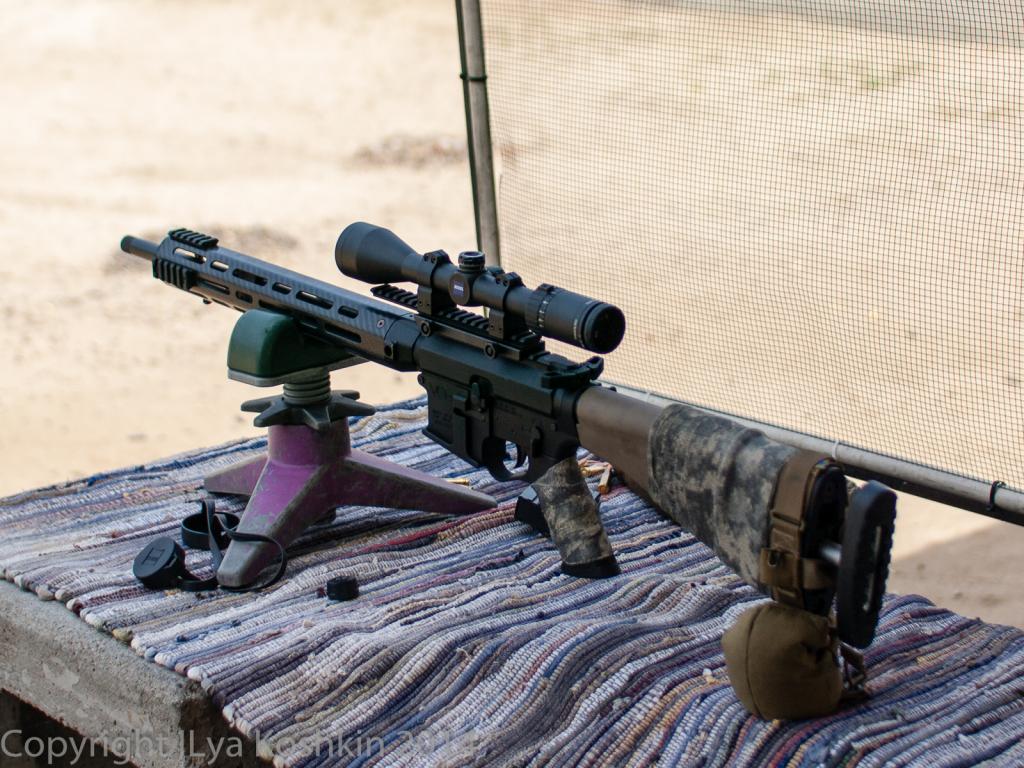 The range where I shoot most of the time generally goes out to 600 yards, but since neither of these is really a long range scope, I kept my shots within 400 yards, with all of the tracking tests done at 100 and some plate shooting at further distances. 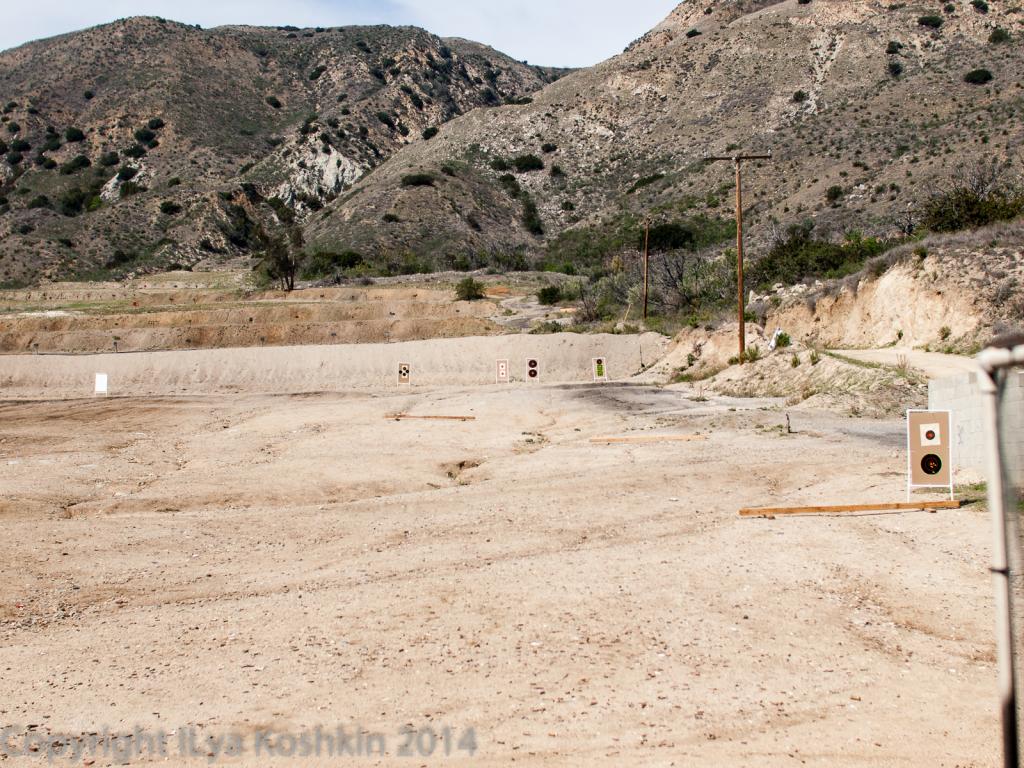 The Terra held its POI just fine once zeroed, but zeroing itself was less straightforward than i expected.   The adjustments were doing something non-linearly screwy and it took me quite a bit more effort to get the scope properly set up than I expected.

As you may imagine, I have gotten pretty adept at zeroing scopes over the years since I do it all the time, so this took me by surprise.  I expected the same kind of issues when I did a simple tracking test and it did start in an odd manner.   However, a bit into the tracking test, the adjustments inexplicably settled down and worked fine afterwards.  Go figure.

Either way, this is a simple hunting scope with the “set and forget” type of a turret, so in the grand scheme of things all I care about is that it holds zero.  This scope is unlikely to be called upon to dial shots in.  It seems like it would be capable of it in a pinch, but there are other more suitable turret designs for that.  The feel of the adjustments is notably lighter and less solid than those on the Conquest I had tested it against.

The look of the turret is singularly conventional with ¼ MOA clicks: 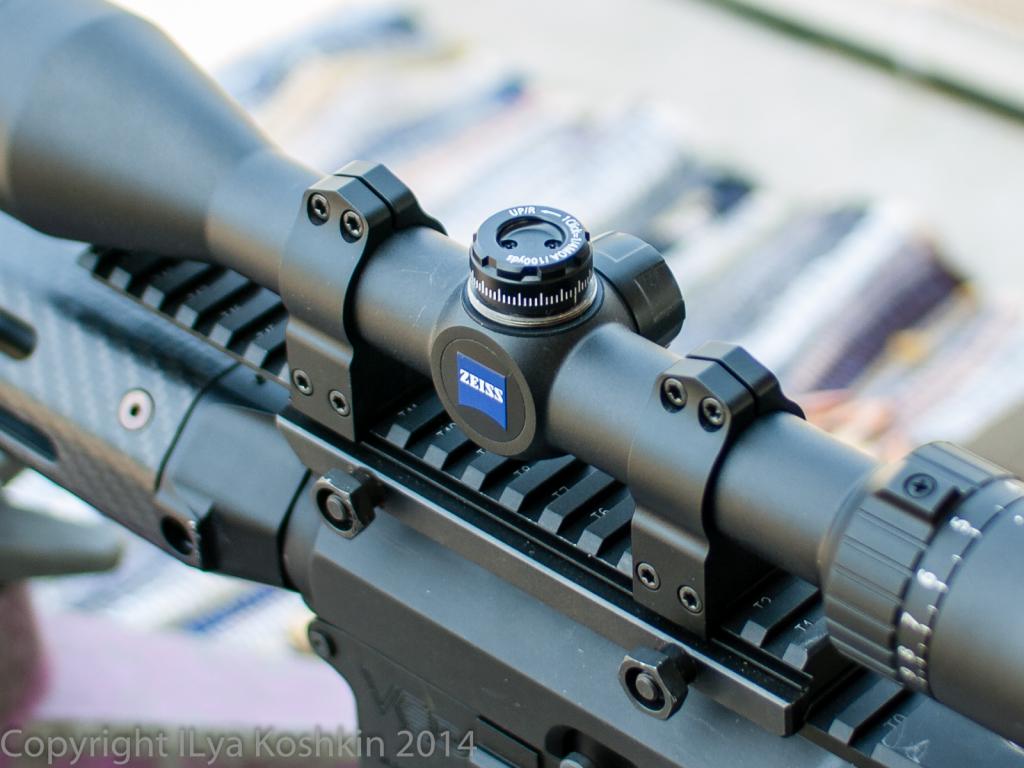 While unobtrusive, the turret was pretty easy to grasp.  Aside from the turrets, there really aren’t too many controls on this scope: magnification and fast-focus eyepiece are pretty much it.

The magnification ring rotates clockwise to increase power, which is the opposite from the direction of the Conquest magnification ring.  I am guessing that whichever OEM makes the Terra for Zeiss had some sort of a standard 3-9×42 design and Zeiss is simply buying it without making any modifications other than cosmetic features.

I have found no issues with magnification and eyepiece focus.  Both were well weighted and smooth to operate.

Optically, the Terra was inferior to both the Conquest and the Monarch in every way other than the FOV.  Interestingly, the Monarch performed better than I expected and was only marginally worse than the Conquest.

Comparing the Terra to the Conquest was the most clearcut optical test I have done to date.  I thought that my eyes were lying to me, so I repeated the test a couple more times on different days.

The Conquest was easier to get behind, had better depth of field, resolution, contrast and edge performance.  It is not that the Terra was bad per se.  It was just worse than the Conquest and seeing a Zeiss logo on that scope was plain weird.

The first thing you notice when acquiring the image through Terra is that it has a very thick black ring around the image.  It almost looks like tunneling and this is the first time I see something like this on a Zeiss scope.

Then there are the hazy edges.  Center 50% of the FOV is pretty good, but as you get passed that, image quality deteriorates significantly.  In that regard, it is similar to the now defunct Minox ZA-3 which also had hazy edges.  However, ZA-3 had exceptionally good centerfield resolution and this scope does not.

Color balance is pretty neutral, or at least not distinctly different from the Conquest or the Monarch.  Contrast was decent, but the image did not pop.  For subtle color variations, Conquest was noticeably better, but overall Terra did adequately with contrast.

Resolution, on the other hand, was a problem.  Try as I might, at 9x, I could not get an image to be truly sharp.  At 9x, both the Conquest and the Monarch gave me noticeably more detail.  At 6x and below, the three scopes were closer in performance, but Terra was still lagging behind the others.  I had a Vortex Viper HS-T 4-16×44 with me during one of the test days and it was also better than the Terra.

In order to keep the comparison clean, I took the ring tops off of the Grabber rings I had and kept cycling through the scopes at varying magnifications: 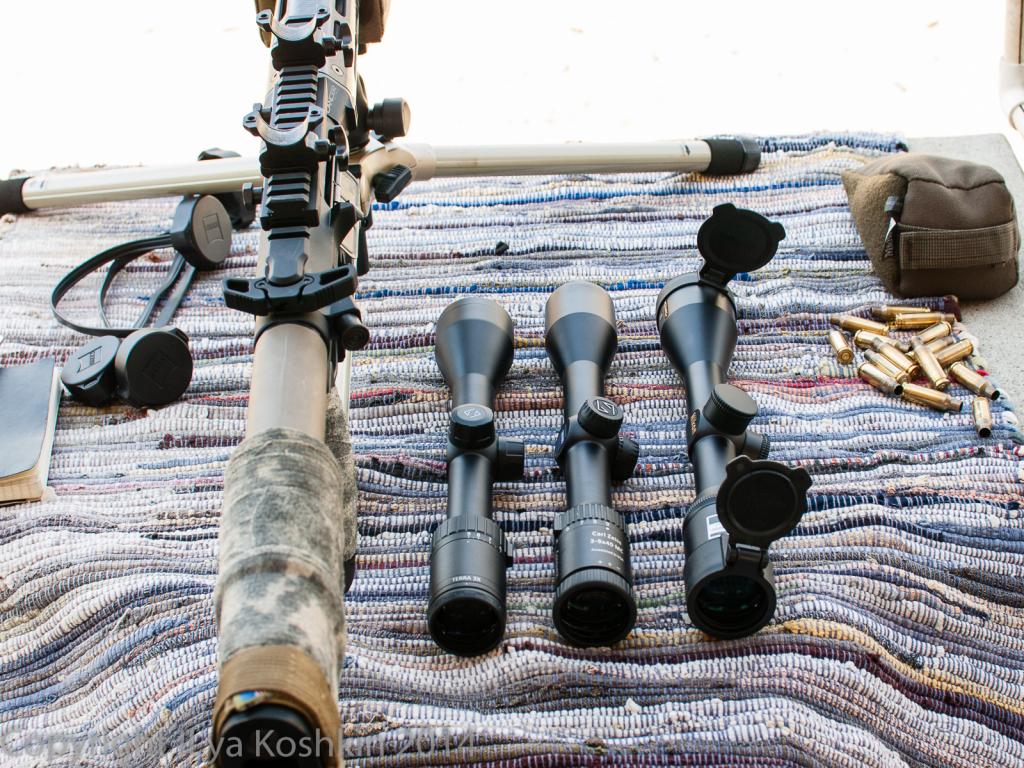 This arrangement gave me a very consistent head position, and I did not have to move my head when swapping scopes.

I thought that perhaps there was an issue with focus distance, so I repeated this exercise with targets at a few distances between 50 and 200 yards.  No luck.

During daylight testing it seemed that flare and stray light were a  bit of an issue and that was confirmed as I went through the low light tests.  Terra was sensitive to off-axis light sources and seemed to have a few odd reflections likely from some internal components.

The coatings looked pretty decent since veiling flare was not a major problem.

Ultimately, I sincerely hope that this scope was an aberration and the rest of Terra scopes are better.  I’ll see if I can get my hands on a few samples to take a look at, but for the time being, all I can say is that I can think of a great variety of scopes that offer more for the money while costing as much as the Terra or less.

If you own a 3-9×40 Conquest, I would not be in any rush to trade in for the Terra.  If I were looking to get a straight forward hunting scope for $400 or thereabouts in 3-9×42 or something similar, I would be looking at Meopta MeoPro, Sightron S2 Big Sky, Nikon Monarch or perhaps a couple of others.