I usually do not do first look articles all that much since most scopes I look at are new to me and I want to spend a significant amount of time with them prior to saying anything at all.

In this case, I am going to make an exception for a couple of reasons:

To that extent, I am more than happy to offer some initial ramblings on how these stack up.

Here is the OpticsTalk thread where these scopes were introduced:

Three new scopes are being introduced, all part of the SWFA SS Classic line:

-Fixed power, rear parallax 10×42 with MOA turrets and a new MOA version of the Quad reticle

-Variable 3-15×42 SFP scope with the new version of the Mil-Quad, this time with a floating center dot

In the interest of full disclosure, I should point out that I’ve been waiting for these scopes for quite some time with great interest.  Earlier this year, we had a nice discussion on reticles and some of my suggestions look to have made it into the Mil-Quad DM reticle.  Naturally, I was very curious to see how it panned out.

Understandably, the 3-15×42 with the MQDM reticle is the scope I immediately popped onto a rifle and headed over to the range.  That is the scope you see sitting on my heavily customized Mosin in the picture below.  The scope sitting on the bench next to the rifle is the original FFP version of the 3-15×42.  If you have a hard time telling them apart, you are not alone.  Other than some markings that identify the FFP scope as such, there are no obvious external differences. 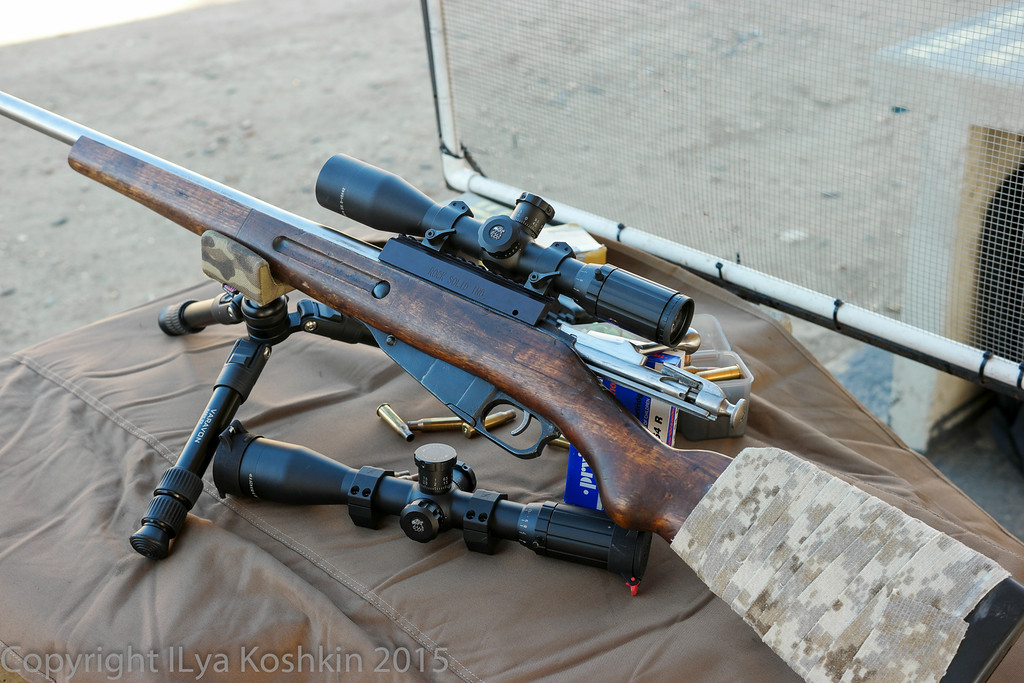 Obviously, I looked at the other two scopes quite carefully as well, but I only checked the “live fire” tracking on the version that you see mounted on the rifle.  I will thoroughly work out all three scope before I publish my final article on the subject.

Now, another natural question that comes up is why I am testing this scope on a Mosin-Nagant (and why this Mosin looks so weird).  The answer is pretty simple: I like Mosins and I know how to make them shoot.  This specific rifle was rebarreled with a precision semi-heavy 25” stainless McGowan barrel and glass bedded into a heavily modified M39 stock.  This rifle project is not yet finished in terms of cosmetics, but it shoots very well.

Let’s start with the fixed power 10×42 scope.  In a way, this is the easiest one to offer an opinion on since it is the same Classic 10×42 scope SWFA has been offering for many years except the original MOA turrrets are now combined with a new MOA based reticle. 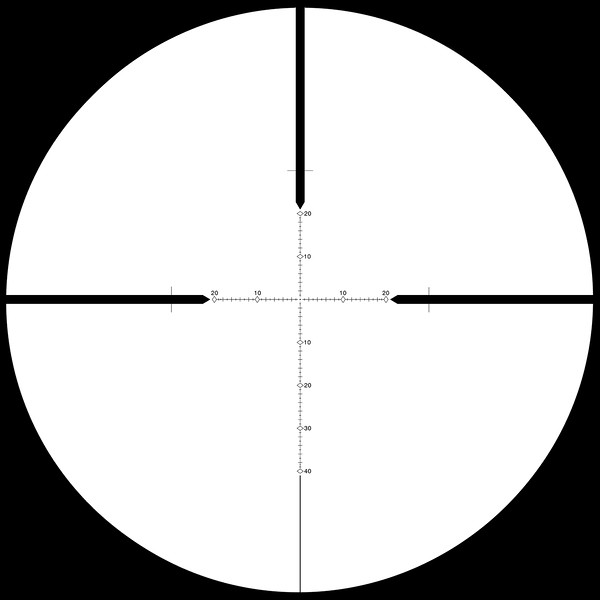 I don’t think I need to elaborate too much on the core scope features.  It has been around for a while and the basic design has proven itself to be almost bulletproof.

When someone asks me what is the least expensive scope you can get to get into precision shooting, I routinely recommend the SWFA SS Classic 10×42.  It has always had rock solid tracking and excellent optical performance for the price.

A few years ago, it was updated to offer mrad turrets to match mrad reticles and now it offers the same basic thing to shooters who prefer MOA to mrad. 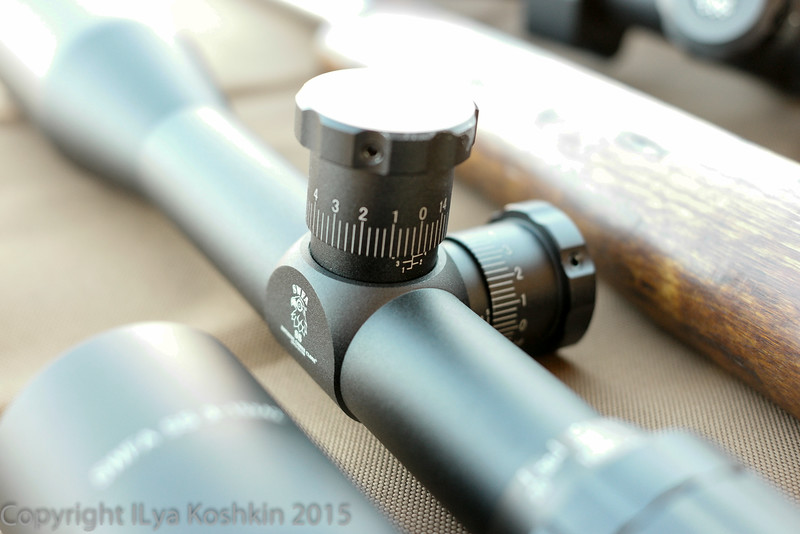 This is the first MOA implementation of SWFA’s “quad” reticle design and at first blush they did a really good job.

The floating dot in the center is a very fine aiming point which offers excellent precision.  The first tracking test I do is to see how well the reticle matched the turrets and the new 10×42 passed that with flying colors.  The reticle can be used for ranging or for hold over with ease.  The little diamonds every 10 MOA keep you from getting lost in the hashmarks and offer a little more granularity for ranging.  To that extent, there are 0.5MOA hashmarks toward the edges of the fine lines in the reticle which also aid in ranging.

Now, I do not naturally think in MOA.  I decidedly prefer mrad based turrets and reticles.  However, with a little concentration I could easily adjust to the MOA-Quad reticle.

They break new ground for SWFA since these are the first precision oriented second focal plane designs in the SS line-up.  To be entirely honest, I had some pretty serious misgivings about them since I generally prefer FFP scopes for most applications involving precision shooting.  Now, that I have spent some time with these two SFP, I warmed up to the idea considerably.

First of all, to step back a little, I am really happy that they are adding different variations to the basic 3-15×42 design.  The “chassis” of this scope, for lack of a better word, is exceptionally good and it makes absolute sense to make several variations of it to suite different tastes.  I look at a lot of scopes and I can not think of any similarly priced design that offer same excellent optomechanical quality in this price range.  The reason I say “optomechanical” is that the overall optical quality of several designs in the $700 is quite good and they hold zero.  However, finding something that also has tactical turrets with flawless tracking and gobs of adjustment range for the same money is decidedly difficult.  On top of that, for whatever reason, most riflescopes aimed at this market have larger objectives (50mm and up).  The SWFA SS 3-15×42 is a good example that sometimes you can do more with less without sacrificing durability or performance.

It is time to get into some specifics.

The basic mechanical package of these new scopes is the same as that of the original.  The scope is pretty trim and not very heavy for this category.  Elevation and windage turrets have 0.1 mrad clicks and go 5 mrad per turn.  The scale on the turret covers two turns.  Side focus parallax is adjustable down to rather remarkable 6 meters, so it works beautifully on everything from airguns to long range rifles (and I have tested the original design on rifles ranging from an airgun to the 338 Lapua chambered DTA SRS). 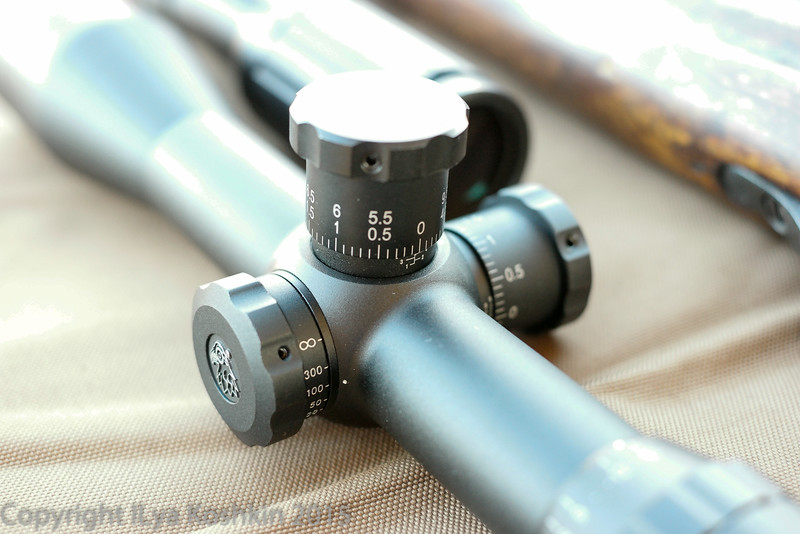 Optical quality looks to be about the same as that on the original FFP scope, although I think I see a little cleaner edge performance on the new SFP scopes.  I do not think edge performance is all that critical on sighting devices, but I am having a hard time finding something else to latch onto.

As with all SS Classic scopes, the optical compromise leans toward resolution rather than contrast (that is one of the key difference between SS Classic and HD scopes).  Color balance is neutral and depth of field is quite generous.  Analyzing flare takes a little time, but during my quick examination, I did not find anything objectionable.  The front element of the objective is a little recessed which likely help with stray light control.  All in all, this is a very relaxing scope to look through.

The eyepiece is just superb.  There is virtually no black ring around the image and eye relief is nicely forgiving.

All SFP scopes have some sort of a reticle shift as you change magnification.  I will later set the scope up on a jig and check, but I do not see any in quick testing I did.

Another thing to look at is reticle hop as side focus is adjusted, but unless it is grossly out of spec, this test is a little harder to set-up.  I did not see any obvious shift, so it is probably well within spec, but I will set it up and do a thorough investigation as I continue my tests. 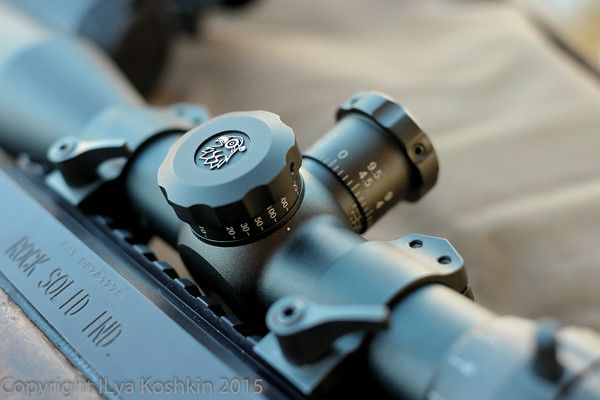 The Mil-Quad2 reticle is pretty similar to the original except the line thicknesses are a little different (important for an SFP reticle) and the center aiming point is a small floating dot.  The dot is 0.1mrad at 15x and it offers excellent precision if you are aiming at something small.  The way line thickness work out, the thin lines are about 45% thinner at 15x and the thick lines are about three times thinner at 15x.  However since, the new reticle is in the SFP, as the magnification is decreased its size with respect to the target changes.  At 8x, the thin lines on the SPF and FFP look to be about the same thickness.  What that means is that you get more precision at higher magnification and the floating aiming dot really helps with that. 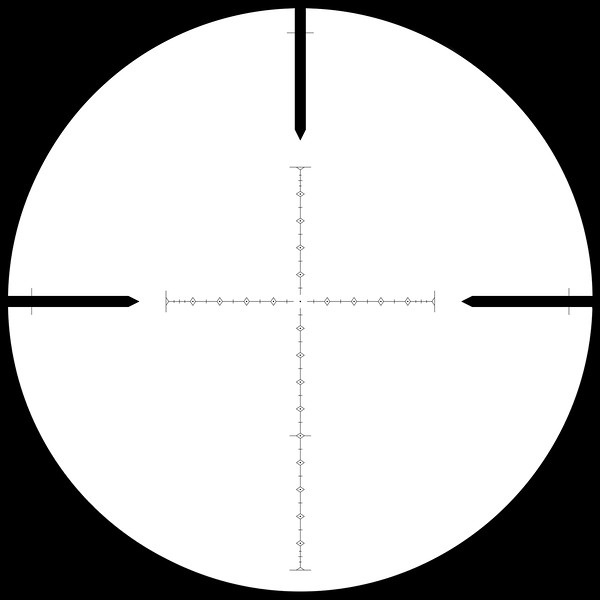 The Mil-Quad DM is a fusion of the original Mil-Quad and the DM reticle in the 1-4×24 SFP scope.  I am liking this one far more than I originally thought.  It is really fast to bring on target without sacrificing the ranging or holdover precision of the original Mil-Quad.  The line thicknesses are the same as on the Mil-Quad2 and a little thinner than on the original FFP Mil-Quad.  However, what makes a big difference is the open corner diamond in the center.  There is also a rather useful choke-style rangefinder in the upper half of the reticle.  However, the star of the show is that diamond.  It gives a bold feature in the center of the reticle which increases both speed and low light visibility to a significant degree.  The corners are not only open, but also skeletonized, providing additional aiming and wind hold points.

The way I like to use this reticle (I gave it a lot of thought before I suggested opening up the corners) is to set it up so that the upper outer vertice is at the top of the flight path for the standard zero.  That way, for any target within this reticle’s MPBR distance, the bullet path is within the diamond (barring crazy winds).  For the ammo I was shooting a few days ago that means that:

The way I like to shoot, I prefer to use the reticle holdover within the 400-500 yards or so, then dial beyond that.  The way the size of the diamond works out, it takes care of most of my holdover needs with a simple high visibility reticle feature, that also helps with wind compensation.

That is at 15x.  I can calibrate it at lower magnifications as well, but honestly, I seldom shoot further out in low light, so there isn’t too much need for me to dial down for precision shooting.  Even with higher magnification scopes, I do most of my actual shooting at 12x to 15x.

Now, when I lower magnification, the reticle dimensions change, but that big bold and visible diamond stays right there in the center of the reticle.

In terms of low light visibility, the MQDM is definitely a better option than both SFP and FFP Mil-Quad reticles. 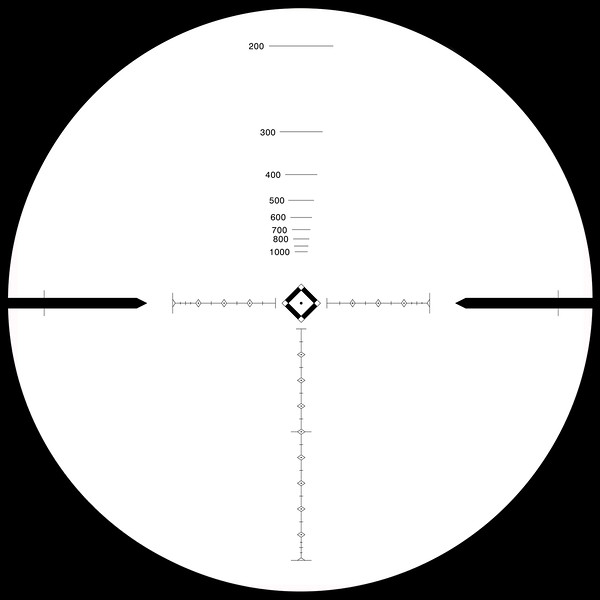 Lastly, now that SWFA has three different versions of the 3-15×42, here is where I see them work best:

-The original FFP 3-15×42 is still the best option out of the three for precision shooting that involves ranging and holdover out to extended distances.

-The new SFP 3-15×42 with a Mil-Quad 2 reticle that incorporates a floating dot is a good alternative for those who simply prefer SFP reticle.  However, it is a perfect option for precision airguns where a very fine aiming point at high magnification is important.  Same for rimfire rifles.

-The new SFP 3-15×42 with the Mil Quad DM reticle can do all of the above, but is simply superb for applications where you need to get a shot off quickly.  That makes it a natural choice for hunters among others.

I’ll keep testing these scopes over the next several months and I’ll put together a more thorough update when I am done.