This is not so much a new article as a refresh of the older one.  It was written in 2014, but somehow I neglected to post it here.

A while back I spent some time looking at the available small spotters and came up with some less than acceptable conclusions the most important one being a simple: “why doesn’t anyone make a truly good one?”

Well, there is a truly good one available now from Vortex which fixes most of the shortcoming I saw in the spotters I wrote about originally.  The original article is appended at the bottom, so if you have not seen it before, do take a look.  It is pretty long, however, so here is the synopsis:  none were good enough.  Nikon Fieldscopes 50 had excellent image quality, but the eyepiece made it very hard to use.  Vortex Recon mini-spotters are too limited due to their configuration.  Minox 16-30×50 is a good deal, but I like lower magnification.

Since I wrote that article, I kept on asking various optics manufacturers why they do not make a truly high quality compact spotter and several told me to sit tight and wait because they have something in the works.  Vortex was the first one to bring something to the market and I was so anxious to see it that I immediately got my hands on one rather than wait for other companies to make their products available.  I held onto it for a quite a while and spent a lot of time with it in varying conditions.

For those who do not feel like reading through my, admittedly verbose, ramblings, here is a brief summary of what I think about the Razor HD 11-33x 50 mm spotter:  if you are in the market for a compact spotter, this is the one to get.  If it is outside your budget, save your pennies until it is within your budget.  It gives me the optical performance of the 50mm Nikon Fieldscope with an eyepiece that is actually usable across the whole magnification range.

Now, let’s get into the details.

First of all, let’s spend a couple of minutes thinking about spotting scopes and their applications.  Generally speaking, spotters are there to show the detail of objects that are quite far away and, all thing being equal, optics is a simple science:  bigger is better.  When built the same way, a 65mm objective lens spotter will outperform a 50mm one.  An 80mm spotter will similalry outperform all smaller rivals, once again, assuming same basic build and design quality.

This simplicity comes to a grinding halt when size and weight considerations come into play.  If all you do is sett up a tripod at the range it is probably not a major concern for you.  If you find yourself humping a five pound spotter with an adequately beefy tripod up and down the hill at high altitude…. well, you start caring very fast.

For the longest time, my primary spotter was a 65m Pentax ED.  If I was limited to having only one spotting scope I would probably stick with the Pentax or something of similar size to it.  However, I am not limited to one spotter, so I plan to have two.  My full size spotter is the 82mm Zen-Ray ED2 which I find to be absolutely superb (and even more superb when you consider how much it cost).  That is what I use when I do not venture too far from the car or when I am at the range.

For my travel spotter, I want something portable and I want it to have the following attributes:

These may not sound all that difficult to satisfy, but they are.  The Vortex Razor HD satisfies all of these except for the presence of a reticle and had it been equipped with one, I would have purchased it from Vortex.  In practical terms, it means that I need a small spotter with a straight eyepiece and objective lens diameter of less than 60mm.

There are a few straight eyepiece roof prism spotters out there like Bushnell Elite that could potentially fit the bill with a 60mm objective lens, but their magnification does not go low enough for me.

For the purposes of this test, I primarily compared the 50mm Razor HD to my Pentax 65mm ED spotter.  In the past, I had compared a bunch of other compact spotters against it, so I know how they stack up.

Here is a spec table, the the Razor, Pentax and a few others:

Looking at the specifications in the table above, the first thing that jumps out at me is how much heavier the 65mm Pentax is compared to all of the 50mm spotters.  Keep in mind that Pentax is easily one of the more compact 65mm spotters out there.  Everything else reads like a Vortex victory march: widest FOV, longest eyerelief and shortest close focus.  It is a touch heavier than the Nikon and a touch longer than the Minox, but still well within my self-imposed size and weight limits.

In terms of image quality, the Razor HD is very similar to the Nikon across the board, except it has a wider magnification range and better eyepiece.  Both stayed remarkably close to the larger Pentax both in terms of resolution and contrast up until 25x or so.  Generally, unless you run into low light issues, I do not think you will be shortchanged by the Razor HD in terms of image quality.  It was better than I expected and i expected it to be pretty good.  I ran into minimal chromatic aberrations, no real flare or stray light issues and an exceptionally precise focusing knob.  Notably, the focuser is a dual speed arrangement with separate coarse and fine adjustments.  I found it be superior to the singe speed knob on the Pentax and Nikon.

I used it in a great variety of conditions from handheld at 11x to mounted on everything from heavy duty tripods to miniature table top contraptions with no issues whatsoever.  Even the little flexible Joby tripod worked well: 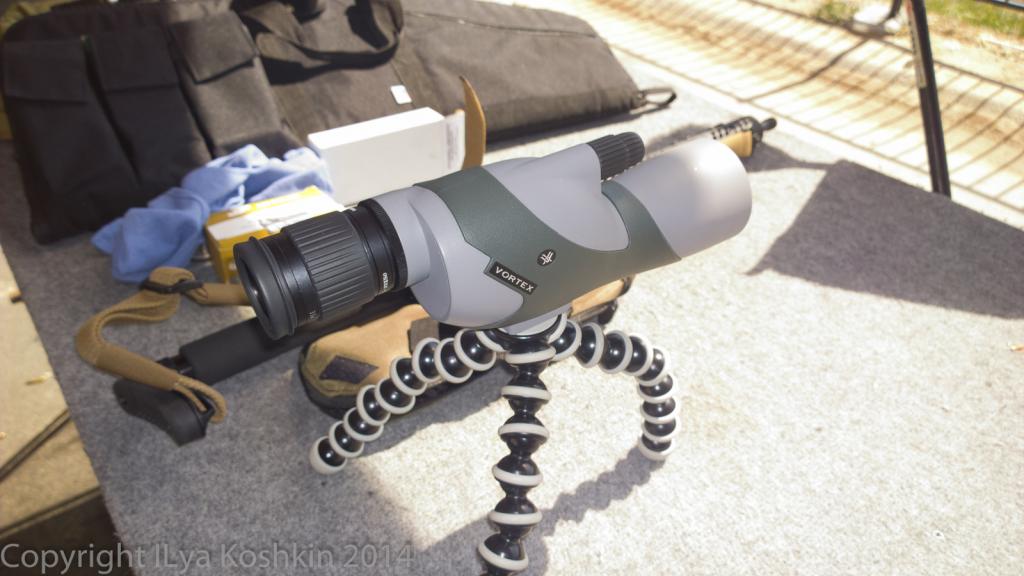 To give you an idea of how compact this thing is, here is a picture next to the rather diminutive fixed power AR scopes I was looking at recently: 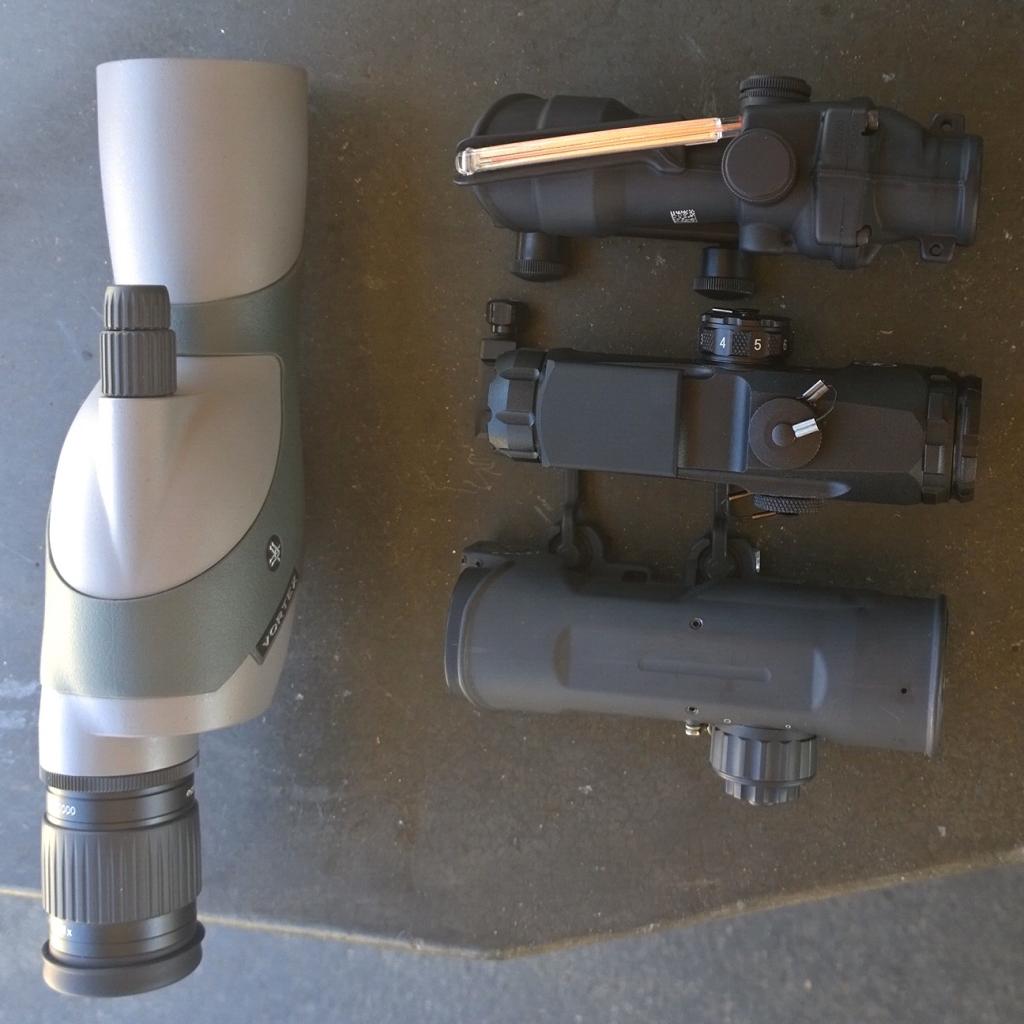 One thing I did not like a whole lot was the folding rubber eyecup, but I could make it work: 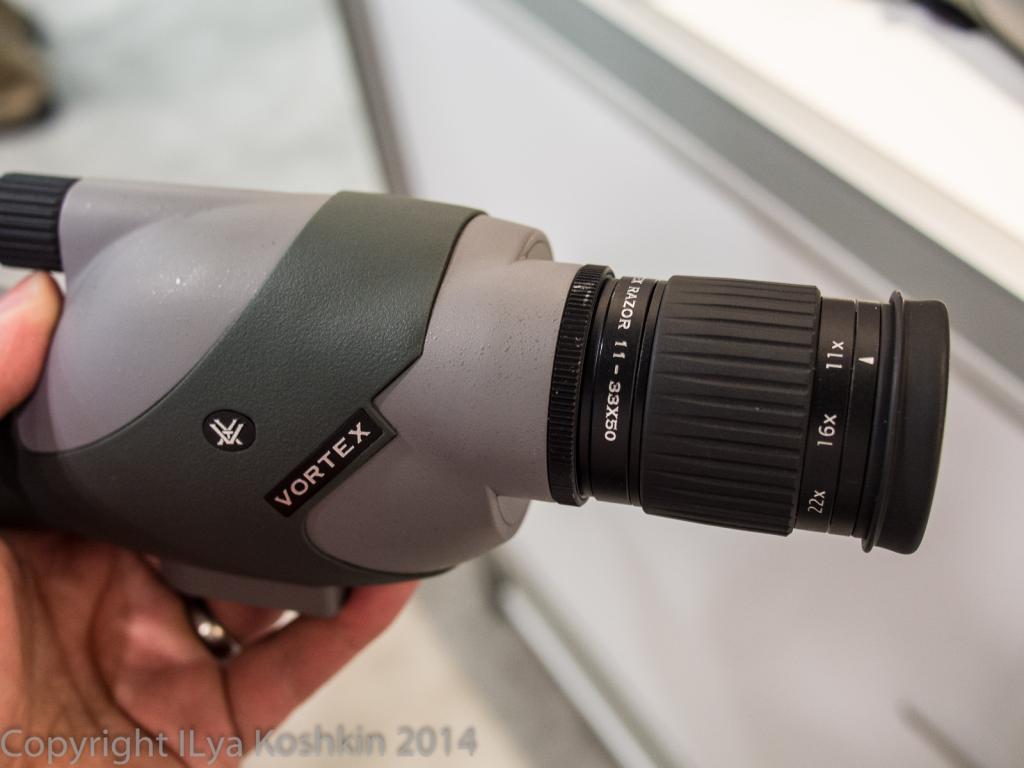 As a matter of curiosity, I also used it next to a great variety of riflescopes and binoculars to see if this spotter can truly show me sufficiently more information to justify its use.  I found that when I have my precision rifle out which typically has something like a Premier 5-25×56 or March 5-40×56 on it, this spotter is only useful if I am leery about pointing my rifle with the large riflescope on it at something.  Aside from that, a $3k+ high end tactical scope can double as a spotter without undue stress.  However, when I was out with just about any rifle sporting a riflescope that tops out at 15x or less, the tiny Razor HD spotter was a very useful thing to have.  Same for the binoculars: in principle I prefer to glass using both eyes, but if I really wanted to see the details of something even a 50mm spotter is way ahead of any 8x or 10x binocular I have seen to date.

The only real flow with it that I found was the absense of a reticle option.  I am in no particular rush, so I figured I’ll give until the next SHOT show to see if the spotter I want equipped with a reticle becomes available.  If I can not find such a beat, I will purchase the 50mm Razor HD and be done with it.