If you look up a brand name “Levenhuk”, you’ll see all sorts of products that would ordinarily be outside of the scope of the things I look at.

The folks at Levenhuk reached out to me through my website asking if I want to review something.  I am guessing that they are a growing brand looking for publicity.  I do not think they will be too excited about my take on their Sherman Pro binocular, but such is life.

I dug through their website and found that they market a 6.5×32 binocular with very wide FOV.  The specs looked identical to United Optics BW18.  United Optics is a Chinese OEM company that makes a great variety of things including binoculars, some of which are reputed to be quite decent.

Here is a link to the United Optics page that lists the BW18 family:

Here is a link to the Levenhuk page with the Sherman Pro 6.5×32 which looks liek the same binocular to me:

Prior to looking at this binocular, the only knowledge of the Levenhuk company I had was through the OpticsTalk forum.  For a while someone was actively spamming the forum with Levenhuk links and the same robot would occasionally barge onto my website with the same spam.  Well, as you imagine, all spam was deleted immediately.  I think most people have the same opinion of unsolicited spam and there is a reason professional spammer try to remain anonymous.  Even cops would probably refuse to protect them.

Still, the name Levenhuk reminds me of early science classes I had in Russia where we talked about a 17th century Dutch scientist who is effectively the father of microscopy.  Technically, his correctly spelled name is Antonie van Leeuwenhoek (here is a Wikipedia article on him), but I can’t even begun to try to figure out how to pronounce that correctly.  In Russia we spelled it “Levenhuk” and I suspect the correct pronunciation is not too different from that.

We mostly studied him because he was a contemporary of the Russian Czar Peter the Great who lived in Holland for a bit and met with Leeuwenhoek at some point.  Leeuwenhoek was the discoverer of single cell organisms owing to his ability to build homemade microscopes that far surpassed anything available in his day.  Read up on him if you are curious, but I suspect that he was one of those freakishly brilliant people who pop up in human history occasionally and make a difference.  Most of them die early, but Leeuwenhoek lived until 90, so he built a LOT of microscopes.

That aside, the Levenhuk company seems to market a great variety of Chinese OEM’ed products and the Sherman Pro binocular I looked at is one of their higher end offerings.

I like 6x or similar binoculars (my go to binocular is a Vortex Viper 6×32 and has been for a few years now), so this was an interesting test to do.  In addition to the Viper 6×32 which is much more expensive, I have Vortex Raptor 6.5×32 and Kowa YF 6×30, which are priced similarly to the Sherman Pro and offer a good comparison.

I included the Leupold Yosemite 6×30 in there, but I do not have one of those in hand.  I gave it to my nephew and he lost somewhere in Alaska earlier this summer.  Kowa YF30 is the same binocular as the first generation of Leupold Yosemite was.  Leupold moved their production to a different place in China and, in my opinion, the new Yosemite 6×30 is ever so slightly worse than the original one, and I know how they compare. 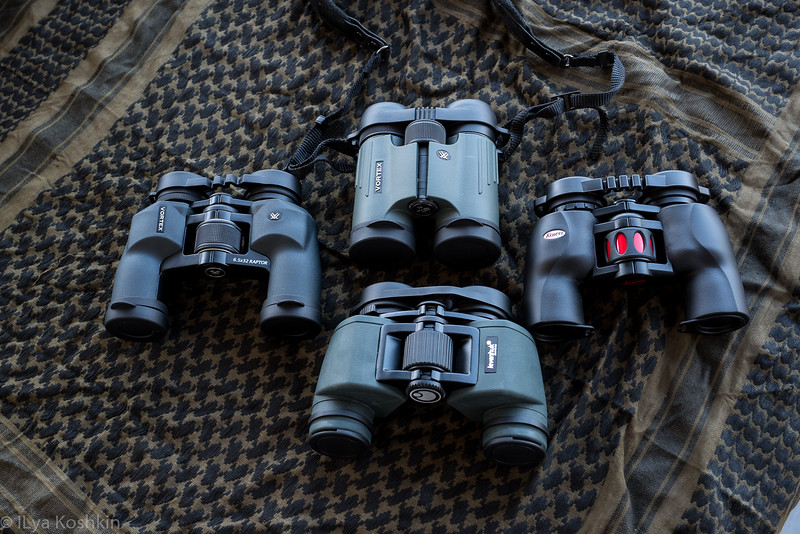 All the numbers are from company websites and I did not fact check every single one, but nothing there jumps out at me as particularly fraudulent.  Other than the Viper, all of these binoculars are made in China.

On paper, the Levenhuk looks good.  It is a bit heavy, but it has long eye relief and massive FOV. There are some differences in close focus distances, but I sorta assume that if you are looking for a close focus binocular, you will not be going with a traditional porro anyway.  Those widely spaced objectives make close focus difficult.  If you are interested in close focus you should be looking at inverse porro or roof binoculars.

If you look at the pictures, it is readily apparent that the eyepieces on the Sherman Pro are notably larger diameter than on the other binoculars here and the prisms are a fair bit more massive either. 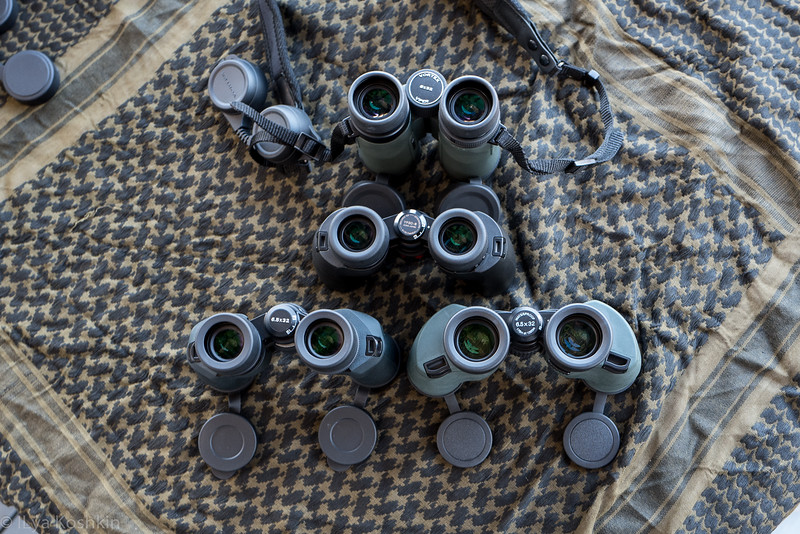 While I am generally all for extracting lots of FOV from my binoculars, in this case I have decidedly mixed feelings on the subject.  While the FOV of the binocular is indeed impressively sharp, the sweetspot is not very large.  My best guess is that center sharpness is maintained for about 30-35% of the FOV and outside of that, the image gets softer quickly and all sorts of geometrical aberrations start setting in.

From the handling standpoint, the large prisms move my hands sufficiently far apart that reaching the focus wheel is fairly uncomfortable.  I have average sized hands, so someone with larger hands would not have that issue.  The size of the eyecups did not give me any issues.  They are a little larger than those of the other binoculars here, so they index on a different spot of my eye socket.

Still, the eyecups are pretty comfortable and getting them aligned for my eyes was not difficult. 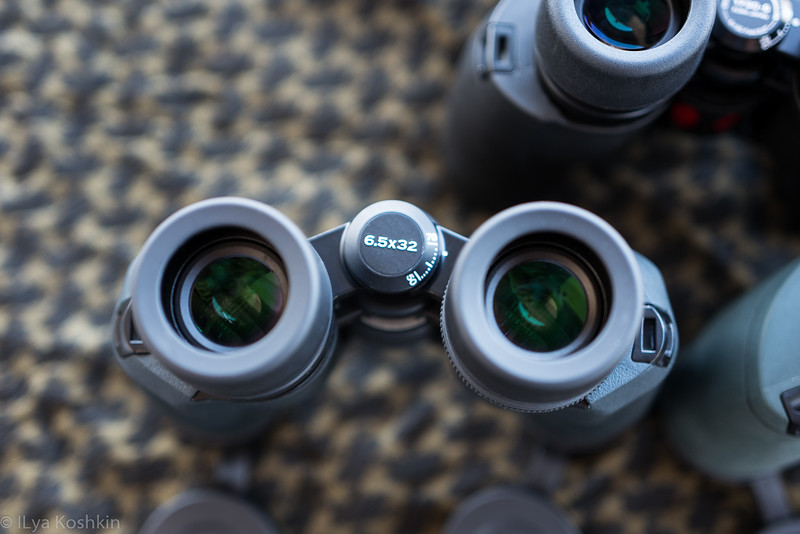 While we are on the subject of eyecups, I think they are supposed to have two intermediary clickstops between the “all the way in” and “all the way out” settings.  On the left eyecup, those positions are reasonably distinct.  On the right eyecup, you have to really focus to figure out where they are.  If the way you use binoculars involves applying a fair amount of pressure against your eye socket, the intermediary positions on the Sherman Pro eyecups do not do much: they collapse.  For practical purposes: it is either all the way collapsed or all the way pulled out.

I have a fairly simple durability test for binoculars: I leave them in the trunk of my car for a few months.  Now, they are wrapped up and they do not bounce around.  I am not trying to abuse them.  However, I live in California, so they get fairly hot and I drive an offroader, so there is some vibration.  That is a fairly normal use case for me: I always have a pair of binoculars in the car and that is the minimum abuse they have to sustain.

When I first received the Sherman Pro binocular, I tested them in a variety of lighting conditions.  Then I shoved them into the trunk of my car for about three months.  It was not supposed to be three months, but my day job went into overdrive and I was busy.  Now, I pulled them out and tested them again.  I do not think they faired too well, since now it takes less than a minute of staring through them to develop a searing headache.  My best guess is that they developed some sort of a collimation issue that was not there before.

Outside of that, mechanical feel was fairly decent.  Build quality was reasonable and the focusing knob adequately smooth.  There was a little hysteresis, but not enough to cause problems.  I did not check how waterproof it is.

Optically, as I mentioned above, the sweetspot was pretty small and the sharpness roll off toward the edges was quite noticeable.  Chromatic aberration is usually not too prominent in low magnification binoculars, and this one is no exception.  I did not see much of it at all in the center of the FOV and it got a little more noticeable toward the edges.  Color cast was fairly neutral and overall contrast was respectable.

Side-to-side against the Vortex Raptor which is its most direct competitor, Sherman Pro was able to stay close in terms of optics, but the Raptor was a touch better in terms of both resolution and contrast.  While the Raptor’s FOV was smaller, the sweetspot was actually larger and I did not run into any QC issues with the Raptor.

Similarly, there were no QC issues with the Kowa and while it has slightly lower magnification, it was just a touch behind the Raptor in resolution and similar to the Sherman Pro.

Both the Vortex and the Kowa have slightly more compact housings, so there was a little less reach to get to the focusing knob.  That was a better fit for my hands.

To summarize: Levenhuk Sherman Pro I looked at had a couple of QC issues.  Since I only looked at one, I do not know how prominent such things are in this product family, but this is not a good sign.  As far as general performance goes, even without the QC issues I would have a hard time making a case for the Sherman Pro instead of the Raptor or Kowa YF.  Of course, had the edge performance been better, perhaps my conclusions would also be different.  As is though, I am not terribly impressed.