Vortex Optics makes more than just riflescopes, but for the time being, I will focus on riflescopes only.  That is a bit of a bass ackwards way of doing things since, in my recollection, Vortex started out with a bit of an emphasis on binoculars.  However, their riflescope line really took off and seems to generate more interest.  Still, their binocular line-up is slated to go through a complete redesign in 2011 and I will put together an article on that some time in the spring (I have vested interest in that since my “go to” binoculars are Vortex).
The company itself has not been involved in the riflescope business all that long; however, the people behind it have been in the optics business since the mid-1980s.  The company itself is based in Wisconsin, but the riflescopes they market are manufactured overseas: Japan, Phillipines or China, depending on the product line.  At the moment there are four distinct riflescope product lines marketed by Vortex:

This arrangement is going to change somewhat in 2011, with the Viper line being largely replaced by Viper PST and Viper HS.  I will touch on that in the section on Viper riflescopes, but the other three product families continue unchanged for the time being.

Vortex Crossfire
To be blunt, these are “me too” products that almost every midrange scope company has to have in order to satisfy the most price-conscious of their customers.  Most of the competition in this segment is on price, quality control and customer service.  There are scores of similar products out there from different makers and it really comes down to who can hold their OEMs to better consistency and who is willing to support the end-user through thick and thin.  Vortex seems to do pretty well on both counts.  Crossfire scopes are not going to win any performance awards (nor should they be expected to considering the low price tag), but they hold up pretty well in normal use.  As far as customer service goes, Vortex has developed a reputation of offering almost unrivalled customer support.  Truthfully, I would much rather not need customer support, but if you are forced into needing it, you could do much worse than Vortex.  Crossifre scopes cover a large gamut of configuration ranging from diminutive 2×20 (pistol) and 3×32 (crossbow) scopes to a rather substantial 8-32×50 built on a 30mm tube.  That 30mm tube is shared with 4-16×50 and 6-24×50 models while all other (lower magnification) offerings are built on 1” tubes.  Those are mostly variable scopes in a wide array of configurations from 1.25-4×32 to 4-12×40, although there are a couple of fixed magnification scope in the mix as well.  Crossfire scopes with 30mm tubes retail for ~$200-$220, while the 1 inch models are cheaper spanning the ~$100-$150 range.  They compete against simialrly priced offerings from a number of companies, like Bushnell Trophy XLT, Sightron S1, and a host of others.  Personally, in this price range, I tend to lean toward simpler configurations and with those I slightly prefer Sightron S1 to most other scopes in this segment.  However, Crossfire is offered in many more configurations and with a richer feature set.  For a number of applications they are a pretty decent way to go.  Bottom line however, in this price range, these are often starter scopes: they are there waiting to be upgraded to something better when funds allow.

Vortex Diamondback
These are easily the most underrated scopes in the Vortex line-up.  They are aimed at typical big-game hunting applications with scope ranging from 1.75-5×32 on up to 4-12×40.  All are built on 1” tubes, with the highest magnification model available with an Adjustable Objective for parallax compensation.  Price ranges from $160 to $300.  Two reticles are offered: simple plex reticle and a reasonaly well thought out hold over reticle.  On the surface these scopes do not offer anything particularly exceptional.  These are “meat and potato” designs.  However, aside from the fact that these configurations work well in the field, Diamondback scopes have a coupel of tricks up their collective sleeve.  One is image quality.  In this price range, these are as good as I have seen.  Another is Field of View, which is uncommonly large and makes for a very relaxed and easy to acquire image.  Eye relief is not very long (although not short either), so on the heaviest kickers you may want to exercise caution.  Eyepiece is pretty beefy, so in some rare occasions it may not be a perfect fit for rifles with high bolt lift. However, these are minor complaints.  Diamondback scopes compete directly against Burris Fullfield II, Nikon Buckmaster, Bushnell Elite 3200 and a few other product lines.  I recently compared about half-dozen 3-9×40 scopes including the Diamondback and it was clearly ahead of the pack. 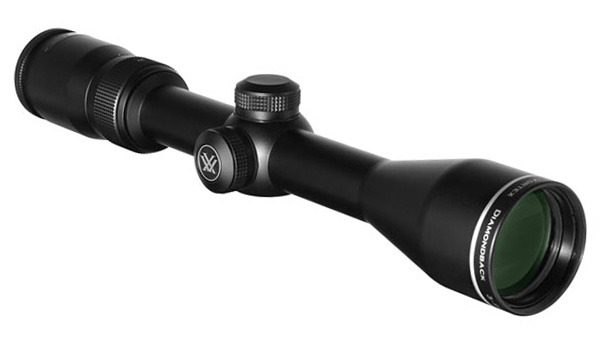 Vortex Viper, Viper HS and Viper PST
Viper scopes are placed squarely in what is likely the toughest market segment to compete in.  These are the “sweetspot” scopes.  In this approximate price range, you get the most bang for the buck in a hunting scope, in my opinion.  Going higher in price gets you into a case of diminishing returns where you pay a lot more money for not a lot more performance.  Just like Diamondback, Viper scopes, in my opinion, are “meat and potato” scopes, i.e. they focus on getting the fundamentals right instead extraneous features.  Up until now, all Viper scopes were based around 3x erectors and were avaialble either with 1” or 30mm tubes.  As of 2011, all of 1” Vipers are discontinued and Viper HS and PST scope lines (both based on 4x magnification ratios and 30mm tubes) are introduced.  The only “original” Viper models still in production will be the 30mm 6.5-20×44 and 6.5-20×50 (incidentally, these are the ONLY sub-$500 high magnification scopes I recommend). 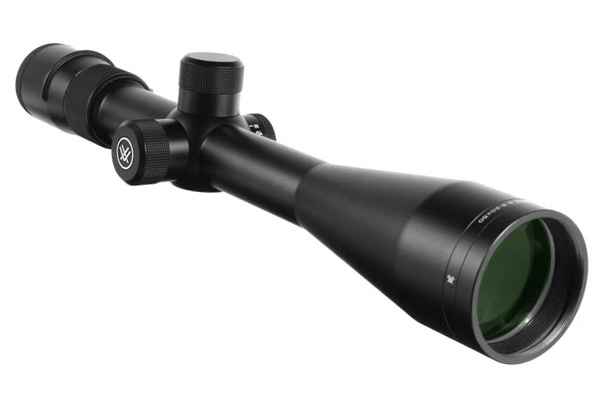 While newly discontinued 1” Vipers will be floating around the used scope market for quite some time.  Here is what I know about the upcoming HS and PST scopes so far.  PST models are designed for precision shooting and tactical applications (I suspect that is where the PST abbreviation comes from).  They will have a few ranging and holdover illuminated rerticles and a somewhat basic zero-stop in the elevation knobs.  A couple of PST scopes will be available with both FFP (front focal plane) and SFP (second focal plane) reticles.  Those  are the 4-16×50 and 6-24×50 models.  Other configurations will only have SFP reticles (1-4×24 and 2.5-10×44).  All PST scopes will have exposed knobs with click values that match the reticles: ¼ MOA clicks for MOA based reticles and 0.1 mrad clicks for mil-based reticles.  Price will range from $500 to $900 dollars depending on configuration.  HS scopes are aimed primarily at the hunting market although there will be some crossover into over applications.  They are essentially the same scopes as PST, except without exposed knobs and FFP reticles.  Also, reticle selection will be aimed at hunting applications.  One notable exception to that is the 1-4×24 HS scope.  It has the same reticle as the similarly configured PST with the only difference being the knobs.  Personally, I see no need for exposed knobs on a low range variable, so I will be looking to get my hands on the HS version of the 1-4×24.  Viper HS scopes will be a bit cheaper than PST and available with the following configurations: 1-4×24, 2.5-10×44, 4-16×44 and 4-16×50.  Since they are knew, I do not have much insight in how they will perform optically.  The original Viper scopes have unusually high image contrast in this price range, and I hope the newer models will continue with that tradition.  They face some very stiff competition from the likes of Leupold VX-3, Sightron S2 Big Sky and similar offerings.  On paper, the new Viper HS and PST scopes seem to offer more features than the competition, but only time will tell how they perform in the field.  Personally, I think they will do well, and the FFP versions will do some serious damage in the sub-$1000 market segment, especially the 4-16×50: 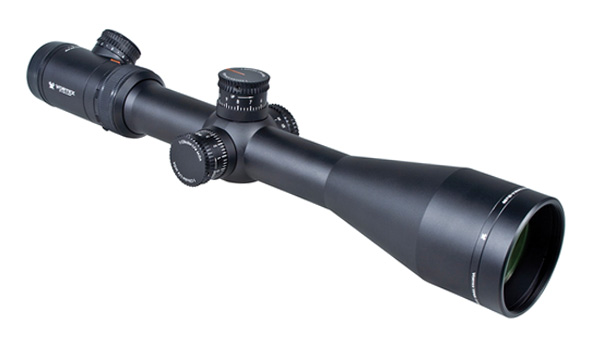 Vortex Razor HD
These are the crown jewels of Vortex’ riflescope portfolio.  There are only two models (albeit with several reticle and knob combinations) and they are expensive.  However, they are appreciably cheaper than the competition that they are going after.
The two Razor HD models are 5-20×50 built on a beefy 35mm tube, and a 1-4×24 on a 30mm tube.  Both models come with illuminated FFP reticles. 5-20×50 gives you achoice of three sophisticated ranging/holdover reticles, one MOA-based and two mrad-based.  Choice of a reticle dictates a choice of knobs, so that they match. 1-4×24 comes with a choice of two MOA-based reticles.  One is agnostic of caliber and another is designed with US issue 5.56×45 ammuntion in mind.
Here is a picture of the 5-20×50: 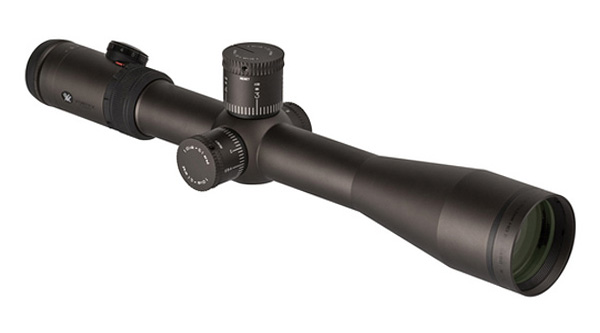 When Vortex sent me a loaner for review, they flat out challenged me to break it.  I think short of blowing it up, there isn’t much I could to damage it.  Nothing I did made any impression.  The 5-20×50 retails for about $2000 and at that price is a relative bargain.  It has every feature under the sun, and they are all well thought out, from knob calibration to a sophisticated ZeroStop.  Both optical and mechanical quality were impressive, and I was very loath to return the loaner to Vortex (but I did since I am no longer equipped to live a single lifestyle, and another $2000 scope would make my wife think about divorce).
The 1-4×24 model is a bit cheaper at ~$1200 and is mostly aimed at various AR-15 rifles out there.  It is well optimized for close-to-midrange applications and, at 4x, is easily good enough to engage targets that are likely to be outside the range of typical AR-15 rifles chambered for 5.56 NATO.
For 2011, the 1-4×24 models soldiers on unchanged, while the 5-20×50 gets another reticle option: modified EBR-2 with some dimensional changes.  The scope I tested had EBR-2 and I liked it, so I am curious to see how the updated version will perform.
Personally, I am very impressed with the Razor scopes and I would like to see the line grow beyond the current two models.  However, Vortex is very tight lipped about any upcoming models.  We’ll see what the future brings.