Nikon is a big name in optics.  In almost any field related to optics, if you look around a little, you will find some Nikon-branded products.  Sporting optics are no different and Nikon markets an impressive array of binoculars, spotting scopes, rangefinders and riflescopes.  The fact that Nikon markets them does not necessarily mean that Nikon makes all of them or even designs all of them.  However, Nikon understands glass and is definitely capable of bringing very well thought out products to the consumer.  I have to warn right off hand, that I do not necessarily agree with a lot of their product choices, but I can see why they chose to define their products in the manner they did.

In this article, I will stick strictly to riflescopes.

If you were to simply go peruse Nikon’s website (or the website of any full-line Nikon dealer), you’d walk away thinking that they are marketing a dozen or so different product lines of varying quality levels.  For the most part you’d be correct, except a lot of them are really variations on the same basic theme and are only differentiated by somewhat mild tweaks like reticle choice.

In terms of quality levels, Nikon has four somewhat distinct gradations: Prostaff, Buckmaster, Monarch and Monarch X.  The rest of the product lines are really variations of these four product families.

Prostaff scopes have been redesigned for 2011, so there really isn’t a whole lot that I can say about them.  I simply have not had a chance to test any of them and only saw them during SHOT show.  These new scopes are manufactured in the Phillipines, like most of their competition.  That is probably a good thing, since the earlier, Chinese-made, Prostaff scopes did not exactly wow me.  I suspect that the new ones will be very competitive at their price point, which is generally in $150-$200 range.  Prostaff comes in several configurations: 2-7×32, 3-9×40, 3-9×50 and 4-12×40.  There are also two rimfire versions: 4×32 and 3-9×40.  Prostaff scopes are available with either Nikoplex or BDC reticles.  All of the Prostaff scopes have fixed parallax setting of 100yards, except for the rimfire models that are set to be parallax free at 50 yards.
These scopes primarily compete against the likes of Sightron S1, Bushnell Legend, Redfield Revolution, Burris Fullfield II and Vortex Diamondback.  How exactly the new Prostaff scopes stack up is not clear yet, but I expect to look at one or two of them some time this year.

One of the Slughunter shotgun scopes (the 3-9×40 model) is a variation on the Prostaff theme and has a holdover reticles designed for shotgun slug trajectories.  It also has a bit more eyerelief.

Buckmaster scopes are made in the Phillipines, just like the Prostaff, but they are a bit more expensive and made to a higher spec.  They have not been updated in the last few years, but I recall when they went through their last refresh about five years ago and I find them to be very competent designs.  The available configurations are the following: 1×20 (mostly intended for blackpowder guns), 3-9×40, 3-9×50, 4-12×50, 4.5-14×40 and 6-18×40.  All of the models with magnification exceeding 9x are equipped with side focus knobs for parallax correction with a focus range of 50yards to infinity.

Pricewise, Buckmaster scopes range from ~$200 to ~$400.  As is typical for Nikon, plex and BDC reticles are available across the board, but in addition the 4.5-14×40 model also comes with an optional Mil-Dot, while the higher magnification 6-18×40 is available with a fine crosshair.

If you simply look at the spec tables, you might be inclined to overlook the Buckmaster, but that would be premature.  While the numbers look unexceptional, the scopes themselves are rather well sorted out and, in their price range, are definitely worth a look.  They really get the fundamentals right: they are sturdy and have decent image quality.  Keep in mind that these scopes tend to be a little long for the configuration which, I think, is one of the reasons I like them: from an optical standpoint, it is easier to build a slightly longer scope.  By not going for very aggressive specs, Buckmaster scopes end up being rather well-optimized.  I also like the fact that their eye relief does not vary with magnification a whole lot. 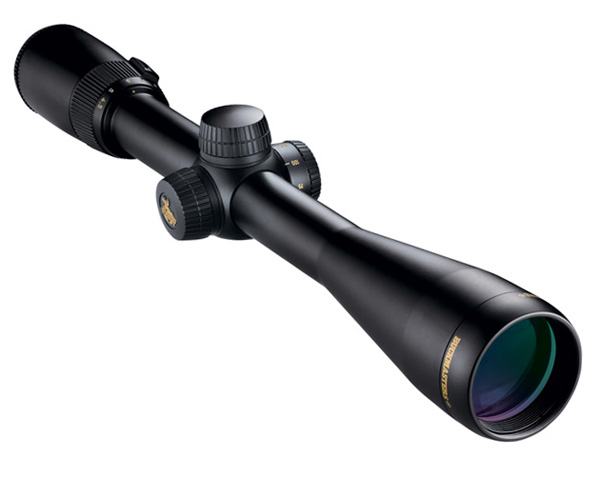 They compete against Vortex Diamondback, Burris Fullfield II, Sightron S2 and Leupold VX-II.  Depending on what you are looking for, any one of these product families might be a better fit than the other.  For example, if you like wide field of view, Vortex Diamondback is the way to go.  On the other hand, the Buckmaster has a touch more eyerelief and an available MilDot.
Nikon’s Coyote Special, Turkey Pro and Omega riflescopes are in the same class as Buckmaster in terms of construction and optical quality, but they are tweaked to suit their specific purposes.  Their reticles are sized a bit differently. Also, Omega scopes have a bit more eyerelief for use on hard kicking muzzleloaders.  Notably, the 1.5-6.5×36 Slughunter scope is also a Buckmaster “on the inside”.

Current generation Monarch scopes are made in the Phillipines, while some of the older models could be made in a bunch of other places in Asia (I recall seeing some Thailand manufactured Monarchs in the past along with the much older Japanese-made models).  Optically, these scopes are pretty decent for the money, although I will say that the higher magnification models are not as good as I hoped them to be.  I think that several product lines from other makers that were traditionally direct competition to Monarch are a little better optically, but they are also a bit more expensive.  Comparatively-speaking, I think the current Monarchs ended up moving “down market” a little, both in terms of price and performance, compared to the earlier generation.  In terms of competition, Monarch goes up against Sightron S2 and S2 Big Sky with the Big Sky being a bit better than Monarch and regular S2 being a touch worse.  Other competitors are Bushnell Elite, Burris Signature Select, Meopta MeoPro, Leupold VX-3, Zeiss Conquest and Minox ZA-3 and ZA-5.  This is a very saturated market segment and by being at the lower end of it price-wise, Monarch has a sub-niche of sorts.  All Monarch scopes have rather long eye relief which makes them user-friendly.  Depending on the specific model, there are three different reticles: plex, BDC and Mil-Dot (with German #4 in the 1-4×20 Monarch African).  All Monarch scopes are built on 1” tubes.  I think these scopes are at their best at moderate magnifications: I like the 2-8×32 and 2.5-10×42 models.  For people who want to learn to use a MilDot reticle on a budget, the 2.5-10×42 scope so equipped is not a bad option at all: 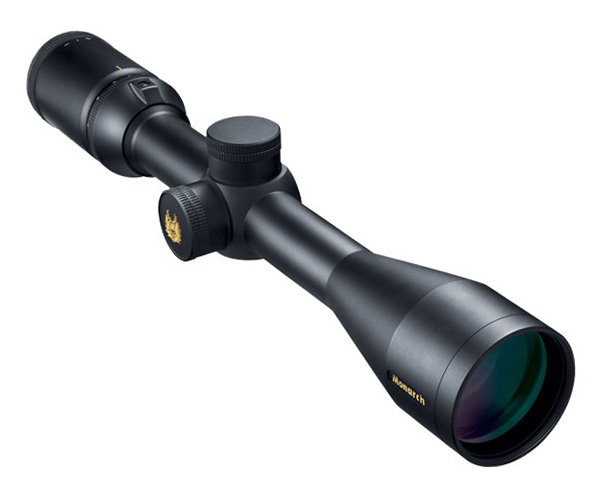 At higher magnifications they have a hard time hanging with the competition like Sightron S2 Big Sky, Minox ZA-5 and a few others.  The 8-32×50 Monarch is notable for the first (that I know of) application of extra-low dispersion glass in 1” scopes and that helps a little at high magnification.  However, that also makes them a bit more expensive ($800+) and the competition there is very strong with scopes like Sightron S3 offering more compelling options.  One problem with high magnification Monarchs is that they have extremely limited adjustment range which makes them difficult to use for long range shooting.  For example, the 8-32x50ED model only has 20MOA of adjustment available.  That can even make scope mounting problematic.  Unless you are comfortable with using the adjustment turrets in a “set and forget” mode, I suggest you look for high magnification elsewhere.

Nikon’s M-223 riflescopes belong to the Monarch family and offer reticles and BDC dials tweaked for use on rifles chambered for 223 Remington (primarily AR-15s of all sorts).  Presumably, these additions make it easier to shoot out to 600 yards which is at the limit of the performance of this cartridge.  Unfortunately, for reasons I do not get (or rather prefer to not verbalize for lack of printable terminology), Nikon decided to optimize M-223 scopes for a particular 223Rem load (55gr bullet at 3240fps) that is seldom used for longer range shooting and for a good reason: it is not suitable for it.  Vast majority of longer range shooting with AR-15s is (and should be) done with heaver 69 to 77gr bullets which are designed just for that purpose (55gr bullet is more commonly used with slower twist bolt action rifles for varminting, while most ARs are optimized fr heavier bullets).  Even the military (not exactly known for innovation) switched to a 62gr bullet in the 1970s, with the 77grain Mk262 load becoming more and more common in the last few years.  Sticking with the 55gr ballistics as the baseline for M-223 scopes is, in my opinion, more than a little silly and I hope Nikon will make changes accordingly (to be honest, being 30+ years more behind the curve than our military has got be embarrassing).

These are a small family of very competent scopes with good performance, but somewhat outdated specs.  Spiritually, these are kinda like high end Buckmasters: they do not look in any way exceptional (or feature rich) on paper, but they are rather high performing scopes in real life, in a “meat and potatoes” sort of way.

All of these scopes have reticles in the second focal plane and are built on 30mm tubes.  They are made in Japan.  Monarch X scopes have exposed turrets with 1/4MOA per turn adjustment.  All of the scopes with magnification 10x or higher have side focus.  Eye relief is long and flexible across the board ranging from 3.5 to 4.1 inches depending on the model.  These are not compact scopes, but they are well optimized for any lighting conditions, with 2.5-10×56 specifically aimed at low light hunting.

Both optically and mechanically, these scopes are very good.  Pricewise, they range between $650 and $1200 depending on the model and on whether there are any promotions going.  All of the models, in my opinion, are well designed and well built.  While not cheap, they are worth the money.  Personally, I am very fond of the 1.5-6×44 Monarch Gold, since I like the configuration and it is becoming increasingly less common: 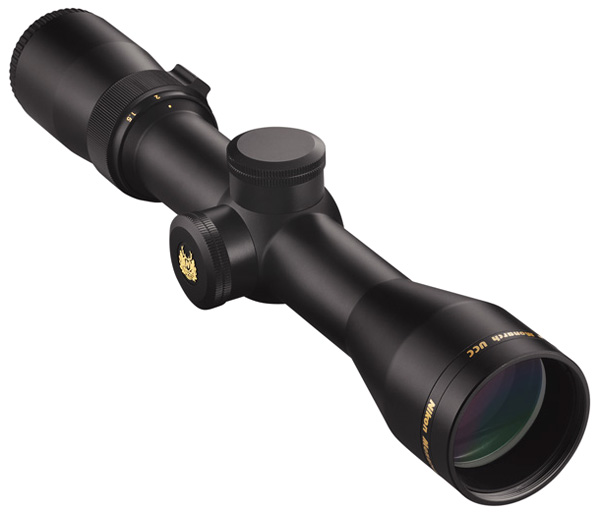 I have also tested a 2.5-10×44 Monarch X recently and walked away rather impressed.  I wish that the MilDot versions of Monarch X came with Mil-based knobs (like some of the competition now does), but I can live with them as is. These scopes compete against the likes of Sightron S3, Meopta Meostar, Zeiss Conquest and a few others.  Naturally, depending on your specific needs any one of these might end up being the right fit but the 30mm Monarch X, Gold and African can definitely hold their own.  Personally, I would really like to see a M-223 version of one of the Monarch X scopes, perhaps with a BDC knob properly calibrated for 77gr Mk262 ammunition.