So, day two is in the books and I figured as long as we started with the USO 1-8x theme I might as well continue it with the S&B, the PR, and perhaps the March 1-10. I have not been around to the IOR booth yet so that will have to wait.

I was privileged to speak with one of the engineers at the S&B booth who has been designing the 1-8x over the last two and a half or so years and was able to ask her a few of the questions that have been plaguing my mind concerning costs, timetables, and illumination technologies.

The cost and delay issue are to some extent spawned from the same intrinsic design difficulties. As the erector ratio is increased from say 4x in a 1-4 power scope to 8x in a 1-8x scope, the tolerances in the mechanical parts do not decrease by a power of 2 but rather by a power of something on the order of 64. (She gave me the exact formulas but I couldn’t write fast enough and didn’t fully understand some of the terminology anyway.) The tolerances become so tight that simple elements such as the glass etched reticle itself become difficult to get right. This perhaps explains why some of the March reticles appear a bit uneven at their highest magnification. Adding a flash dot on top of this and getting it to show up in the right place at all magnification ranges adds another layer of difficulty. I did inquire as to the technical details on how a flash dot works, but these are secrets not to be shared with me, or you, by proxy.

So, lets add it all up shall we. A high erector ratio requiring exceptionally tight tolerances and complicated by a flash dot system coupled with the requirement to be durable and repairable as well as have a large and reasonably flat field of view and you get a better than three-year development time as well as a complete redesign of the optical system from both S&B and PR. For the record, I was incorrect in assuming that the latest 1-8x delays were due to simple production capacity limitations from the PSR contract. Rather, a few more tweaks have been made to the scope to make it easier to repair, less expensive to manufacture, and optically better. Oh, and there have been a few parts shortages from suppliers as well.

The bottom line is this:  S&B took a very long time to release this scope because it is intrinsically difficult to make and S&B has high standards for how good it must be to be released. Speaking of which, it’s not really released yet, but were not talking about it being a year out this time either. The design is done and it’s ready to enter production. The scope I pawed (for perhaps an uncomfortably long time from their standpoint) is identical to a production unit.

That brings me, via the barn to the house, to the actual optic in question. I have it pictured here next to my GRSC 1-6x scope for size comparison.

It looks…well, okay, it doesn’t really look very interesting. Kind of long and skinny and not really all that aesthetically pleasing; but it is pleasing in many other ways, I assure you. The knobs all feel good as does the power adjust and the diopter. The windage and elevation are locking but tool free knobs. They pull up to rotate and push down to lock, if memory serves. On the left side of the saddle is the illumination module, which has settings for the flash dot. It has plenty of brightness for daytime use. It also appears to have settings to illuminate the rest of the reticle but, to be honest, the reticle is very fine and it was fairly bright in the exhibition center so I couldn’t really make out the full reticle illumination.

Here is the flash dot at 1x:

Here is the flash dot at 8x:

As many have noted before:  the reticle is very fine. Without illumination it is difficult to pick up on a background with any texture. If there is a fault with this scope, that is it. For CQ/B it requires its batteries. As for the optical properties, they were excellent. It exceeded my (very good in its own right) reference scope in clarity as well as field of view. I was somewhat worried that the S&B’s fairly small exit pupil would prove problematic, and perhaps it will when subjected to some more in depth testing, but so far I have not seen this as a problem. The scope is very excellent indeed and I can’t wait to do a full review in a proper venue.

Here are a few teaser pics of the soon to be available 3-20x S&B as well. Perhaps if I get all my work done on the 1(n) power front, I will get back around to get you some more information.

On to Premier. Yes, they do exist. Furthermore, they did have their 1-8x with them. I had heard it was scuttled, then maybe not, then…. who knows, right? Well, I guess whoever is now at the top of the food chain decided a mere two days ago that the 1-8 would be a go. They did not even have fliers printed. Despite this, they had several finished production spec scopes on hand. I confess to being astounded and amazed at all of this because, frankly, it is a very good scope and who wouldn’t want to release an excellent scope? So many people release crappy scopes. If you really want to scuttle a scope, go talk to the folks at the Counter Sniper booth and get them to scuttle one…. errr, all of theirs.

I confess to knowing more than I have let on here. It turns out that for the reasons mentioned in the discussion of 1-8x scopes in my S&B intro, these PR 1-8x scopes are very expensive and time consuming to make. They take twice as long to assemble as a sniper scope and that makes them cost a good bit more:  more to the tune of a $3,999 MSRP. That’s a lot of more. I expect that the hemming and hawing had mostly to do with the question of whether a short to medium range tactical scope could be sold at this price point. See, more speculation from me there, too. I just can’t help myself. Did you know that while food in Vegas is ridiculously expensive, the drinks are quite cheap?

How about some pics.

Here is the Premier at 1x with the flash dot active.

Here is the Premier at 8x with the mil dots illuminated.

Here is the Premier next to my GRSC 1-6x reference scope.

Here is one of the Premier guys holding the new beauty. He doesn’t look too happy, but I think that is more about having had to talk to me and Mike from CS Tactical than it is about the scope. 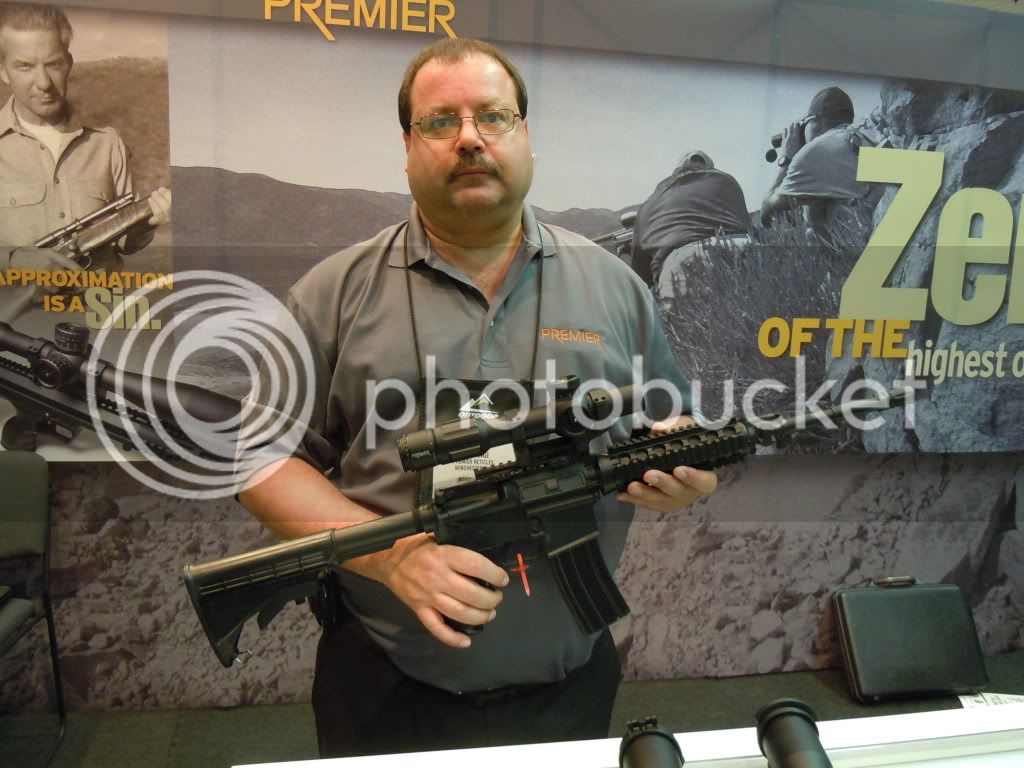 My impressions on the optic are really wholly positive. It had excellent clarity as well as field of view and even seemed to have a generous exit pupil. I am not exactly sure if I prefer its auto switching from full to dot illumination or S&B’s user switched illumination, but I do prefer its heavier reticle which is significantly more useful when not lit than the light S&B one. The turrets are of the nice PR full tactical variety and have the lever on the top for resetting zero. These additionally have a locking feature that works in similar fashion to the S&B version with the pulling up to adjust or pushing down to lock. Excellent turrets. Really, from what I can tell just pawing at it at Shot Show, it is an excellent scope over all. I look forward to a full review.

Now on to the other stuff. You want to know what is going on at PR and I will tell you what little I know. You will no doubt find this unsatisfying as, like any human, you want to know the intricate interpersonal details of whatever politics are involved. Either that or Hollywood has no idea what they are doing when it comes to television programming.

PR is getting new management. Chris has retired, as many of you know. It is my understanding that they have not been bought by Armament Technology (who is their distributor for civilian sales in the U.S. and has been for some time) or anyone else. Scopes are currently being made by the Optronica branch in Germany, which makes and assembles many of the scopes anyway. Warranty work is being handled both by Optronica in Germany and the U.S. facility. Plenty of scopes are available for purchase (though not the 1-8x which has a Aug-Sept delivery date). Bottom line:  a reorganization is going on in the U.S. side of the company.

Don’t expect too much of a post tomorrow. I have dinner and a show with the wife and I am back logged as it is.